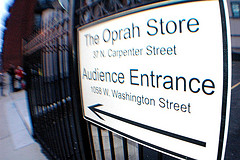 I got the shock of my life on the internet last night.

There on my favorite news website was a big, blue headline: "Oprah Talk Show Going Off Air."

Now, I know she had Sarah Palin on this week, but it can't have been that bad.

I thought Oprah was stronger than that.

+++
Turns out, of course, that Oprah is - in her own way - going rogue. Doing a bit of that mavericky stuff.

Because instead of doing a show for that mainstream icon CBS, it looks like she's going to have her own cable channel - the Oprah Winfrey Network.

Betcha they'll be a talk show on there.

+++
Oprah, as we know, is one smart businesswoman. She's got a brand as big as Jupiter and more power (and probably money) than anyone in the media.

So it pays to take note of what she does.

So what is she doing? She's taking control of her own distribution. Instead of being a slot on CBS, she's going to own an entire channel. 24 hours a day of Oprah doing what she pleases.

SO WHAT LINKS OPRAH - AND YOU? Simply, that you can create your own distribution - your own network.

Now, I wish I could say this was all my idea. But Seth Godin blogged about it first.

Seth was talking about real estate agents - but it applies to any industry. Real estate agents, he said, should create their own publication (their own newsletter) rather than being forced to advertise in newspapers.

Imagine if a local business put out its own weekly publication. It needn't be fancy, but it does have to be interesting and relevant. Pack this publication with local news, what's on events, profiles of local celebrities, details of the H1N1 clinics, sports reports, pictures of newlywed local couples, reports on what the municipality is doing.

Sounds a lot of work - and it is. But imagine if that business joined with other (non-competing) businesses to share the costs.

Your publication would be the talk of the town. Indeed, an essential resource.

And which company would have unlimited space for advertising? The owner of that distribution channel, of course.

OK, I know this sounds crazy. But it's worth at least listening to what Oprah does.

Going rogue does make some kind of sense.

Be mavericky with newsletters you can customize:
http://getreadynewsletters.com


Sign up to receive these message by email: http://www.tinyurl.com/30Emails

Posted at 08:16 AM in Newsletter Success Secrets, Remarkable Marketing | Permalink

The comments to this entry are closed.